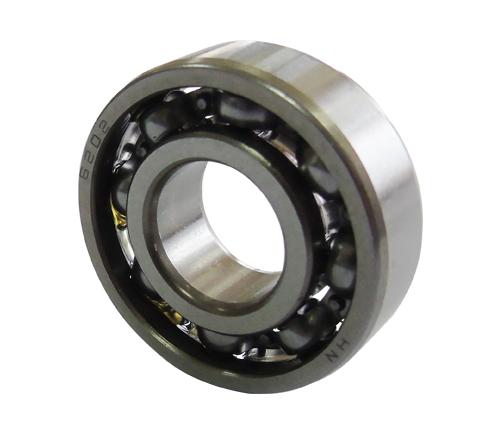 Ball bearings are some of the most commonly used bearings in rotary movement applications. They comprise a row or multiple rows of balls between inner and outer raceways. This design capitalizes on the concept that rolling elements produce less friction than sliding elements. One ring is normally attached to the rotating assembly or shaft, and as it rotates the balls roll around the inner raceway, while the other ring remains stationary. This allows for rotational movement with an extremely low friction coefficient, making it great for applications with high speeds and low friction requirements.

However, they have a relatively low load capacity, so they are typically used in applications with lighter load requirements. The spherical roller shape leads to very small contact points between the balls and raceways. This allows for smooth movement but lowers load capacity abilities. Ball bearings can however accommodate some misalignment of the inner and outer raceway.

There are several different designs for these bearings that specialize in different applications:

Angular contact: These bearings feature axially asymmetrical raceways. This redistributes radial loads through the bearing, making them great for supporting combined loads, or loads in both axial and radial directions. Larger contact angles generally support higher axial loads and lower radial loads, and the opposite occurs for smaller contact angles.

Axial/Thrust: Axial bearings utilize multiple raceways side by side. As the name implies, they are specialized for axial loads; radial loads can cause damage to the bearing by forcing the raceways apart.

Deep groove: A unique raceway design allows these bearings to support higher loads than other ball bearings. However, they cannot handle as much misalignment as normal ball bearings.

NINGBO MOSHENG BEARING CO., LTD. is a Ball Bearing factory. There are also other bearings such as Miniature Ball Bearings. Welcome to visit our official website.