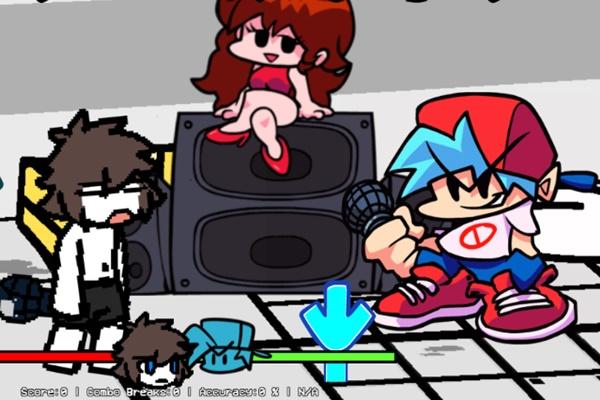 Friday Night Funkin', sometimes known as FNF, is a free-to-play musical rhythm game that has captured the attention of the gaming world. It is an open-source game developed by a small team. However, their Kickstarter campaign has collected over $200,000, so gamers may anticipate fresh material to be released in the game. Meanwhile, there are a variety of modifications available to make the game more engaging. Today, we'll take a look at the top 8 Friday Night Funkin' mods. Make your gaming sessions more interesting by using these FNF mods.

1. FNF Sarvente’s Mid-Fight Masses Mod
Sarvente’s Mid-Fight Masses is a Friday Night Funkin' mod that extends the game by two weeks. The Boyfriend and Girlfriend find themselves at a church looking for a restroom. They do, however, wind themselves in a rap war with Sarvente, the nun. The mod includes a total of five songs. Players who are new to the game may have difficulty navigating the final two courses in this update.
Songs
Parish
Worship
Zavodila
Gospel
Casanova

2. FNF: Indie Cross vs Cuphead, Sans & Bendy Mod
The boyfriend is pitted against legendary Indie characters in this mod. In this FNF mod, the BF raps against well-known characters such as Cuphead. Cuphead is based on the video game character from the 2017 game Cuphead. In addition, players will encounter and combat Sans from the 2015 game Undertale. Ink Demon from the Bendy Franchise appears in this mod as well.
Songs
The Last Reel
Sensational
Snake Eyes

3. FNF vs Speedrunner Mario Mod
Boyfriend and girlfriend decide to spend their holiday in the video game world. However, not everything is as it seems in the Mushroom Kingdom. In this 2-week addition mod to the game, speedrunner Mario and Boyfriend rap duke it out. Speedrunner Mario's beginnings may be traced back to the Something About Series, where he begins as the protagonist but gradually declines to become the primary antagonist over time.
Songs
Personal Best
Qpu Alignment
Speed Demon
Personal Best Parallel
Qpu Alignment Parallel
Speed Demon Parallel
Mariovania

4. FNF: Minecraft Funky Edition
With this unique addon, you may immerse yourself in the world of Minecraft. Players may fight creepers, wolves, and even Herobrine with this mod. This new version significantly improves the game, including the addition of four weeks of time. Players will also get a fully functional Minecraft Menu as well as a fully playable Steve character. This mod is a must-have for Minecraft aficionados, including unique mechanics and cutscenes.
Songs
Sweden
Dry Hands
Haggstrom
Wet Hands
Door
Chirp
Stal
Clockwork Crafter
Equinoxe
Kyoto
Ki

5. FNF vs Freddy Fazbear
This mod transforms Friday Night Funkin' into the universe of Five Nights At Freddy's. Boyfriend and Girlfriend are stuck inside Freddy Fazbear's Pizzeria after nightfall in this update. As a result, the Boyfriend and Freddy Fazbear engage in a rap fight. Enjoy two weeks of FNAF fun in FNF with this mod.
Songs
Week 1
Party
Gelotophobia
Five-Nights
Week 2
Funtime
No-More-Hiding
Broken

6. FNF Plants vs. Rappers Mod
This mod allows you to play Plants vs. Zombies, Zombies vs. FNF, and FNF vs. FNF. In this version, music has died in the world, and it is up to the Boyfriend to bring it back to life. Boyfriend raps against a few Plants vs. Zombies characters in order to restore music back to the planet. In this mod, boyfriend joins Dr. Zomboss' undead gang. The demo version of this mod is presently available.
Songs
Bloom n Brainz
Bad Bash
Juiceless

7. Friday Night Funkin vs. Ben Drowned Mod
This mod derives its inspiration from the famous creepypasta The Legend of Zelda: Majora’s Mask. Players get to meet a character Ben who belongs to that universe. In this mod, Boyfriend and Girlfriend were taking an innocent stroll in the forest when things go terribly wrong. Boyfriend has to rap battle with a horror mask icon to make it out of this mod.
Songs
Drowning
Expurgation
Terrible Fate

These are the top eight mod in Friday Night Funkin'. These are not, however, the only popular modifications in the game. Keep an eye on this as we will be adding more interesting and popular FNF modifications on a regular basis.

Please log in to like, share and comment!
Search
Sponsored
Categories
Read More
Other
Top Melbourne Removalists | Sam Movers N Packers
If you are looking for the Top Melbourne Removalists service, then Sam Movers N Packers is the...
By Sam Movers N Packer 2021-12-07 04:02:11 0 162
Other
FAKE DIVORCE PAPERS ONLINE
Common Reasons to Issue Fake Divorce Papers to Your Partner. Divorce seems like a last resort in...
By Paul Regan 2022-07-31 05:10:36 0 40
Food
Extra Virgin Olive Oil Market | Regional Analysis Focus on Business Economy With Innovative Growth Forecast 2021 to 2023
Market Synopsis: Extra virgin olive oil has the highest concentration of natural vitamins and...
By Rubecca Anderson 2022-03-23 05:31:45 0 86
Other
Medellin Real Estate - CW Group
Inmobiliarias Medellín - CW Group facilitates the search for your property and provides...
By Marilyn Knapp 2020-11-30 13:04:37 0 369
Games
Wordle Alternatives: 5 Must-Try Games
In the months since Wordle first took off, and the green and yellow boxes swept through twitter...
By Conrad Alex 2022-07-06 04:43:53 0 43