Will I be able to have my own house by astrology? 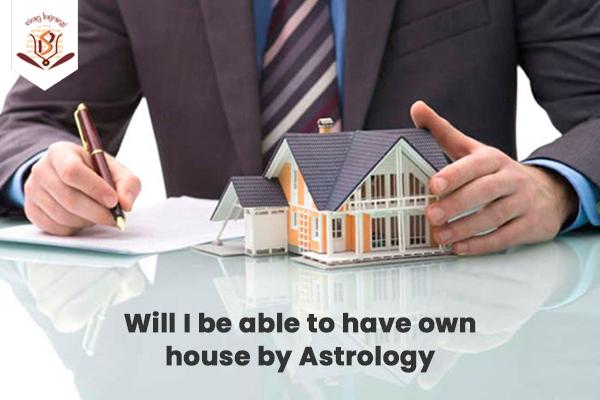 Yes. You would be able to own a house as per astrology, provided the planetary configuration is favorable.

The important question that people in all cross-sections and segments of society, from times immemorial, have faced is whether they would have a home to call their own. During ancient times, astrology was part and parcel of everyone’s existence, and every decision taken would have an astrological reason and remedy behind it. In the technologically advanced era, astrology has not paled into insignificance. It can answer those questions beyond the ken of technological and scientific knowledge. Astrology has always guided us during decision-making in situations beyond us. So, now let us address the question — How to know if one will own a house by using the horoscope?

Using your birth details, an astrologer can advise you on the most conducive time that you have on your hands for property investment/building after confirming if this investment is going to prove beneficial to you or not. If the yoga for owning a property is not so bright, then the strongly placed planets in the rest of the horoscope can compensate for this. If a strong yoga is indicated, property acquisition would be a cakewalk. If planets favor your investment, even the legal problems that come as stumbling blocks can be sorted out automatically. Check if malefic planets are blocking your fortunes, and then decide as per your convenience. Sometimes the querent would be embroiled in an inheritance battle with his co-borns. This dream would not be far away with a strong inheritance property yoga in the chart.

Which planet indicates acquisition of Property?

Some of the planets indicate acquisition of Property. Mars is the prime indicator for land, whereas Saturn is of secondary significance. Venusian and mercurial influence bless you with a lovely house. If the fourth house has an exalted planet or a conjunction of Moon and Venus, you would be the owner of a multistoried building one day.

A fortified second house, indicative of savings and overall wealth, would ensure you have stepped in the right direction. The fourth house points at the location of the place to be owned. The eleventh house, indicative of income and gain, would justify your reasons to own a home. A native with the sun in the fourth house cannot go beyond owning a straw hut. In comparison, Saturn in the fourth would not allow the native to own a new home. Moon in fourth augments the chances for profitable property yoga, whereas Jupiter in the fourth can indicate an extremely powerful property yoga.

When is it best to buy Property?

Ruler of the fourth, when beneficially combined with the ruler of the ninth house, indicates you will bequeath an ancestral home. If the Fourth lord well placed in the second house, the native inherits the mother’s property. When a ruler of the fourth is fortified and well placed in the seventh house, the native obtains property post marriage. Mahadasha of the Bhukti of the ruler of the Fourth House is a favorable period for buying Property. Exalted planets in the fourth house bless the native with multiple homes or other assets. Mahadasha running in the chart, decides whether the native acquires a property or not. Jupiter, Venus, Rahu, and Moon will bless the native with Property while still young. Sun and planet Mars would provide the chances for owning a house in the middle years. Mercury confers property yoga on the native when he is around 32 to 36 years of age. Saturnian influence in the chart will indicate this yoga at 44 years and Ketu after 52 years. These are the best time to buy property.

Source :- Will I be able to have my own house by astrology?